Video of ants loving Terro. They swarm around the small puddle of Terro and then take it back to their nest. They will be gone within one day. Do not disturb them!

Every spring since I have lived in my house, we get an ant problem. I have tried many different ant killers. Last time I went to the store, I couldn't find my favorite ant killer Terro, so I purchased the Raid Ant Gel.  It didn't seem to work.  I found the Terro and purchased it. Yesterday I had ants crawling on my counter (gross I know!) So I decided to do an "ant killing test." On a piece of foil I squeezed out some of the Raid ant gel on one side and Terro on the other. As you can see from the picture, there is one ant on the Raid gel and many on the Terro side. Today, I have no more ants. Terro wins again.

Last year my in-laws had a terrible ant problem in their kitchen, to the point where my mother-in-law stopped baking. My father in law purchased ant traps, sprayed, nothing worked. I told him about Terro. He did what I said to do and in a few days they were gone!

This is what I do when I notice the ants coming. I take a piece of aluminum foil, a 2 by 2 inch piece and squirt out a dime size blob of the Terro Ant Killer on it. I place it where the ants are. Within minutes, the ants are gathering around the blob. Do not disturb them! They are taking the "killer" back to their nest. It will take a few hours. Yesterday, I placed the ant killer down and this morning they are gone. Terro also makes traps where you cut off a bit of an end and the ants crawl in. I've used these as well with great success. As always, if you have young children or pets, please be careful so they don't come in contact with the ant killer,  put it in a discreet place.

Terro did not pay me for this review! I just had to post something that I know that works. I've been using it for years. Please let me know how it works for you!  TERRO #ItWorks! 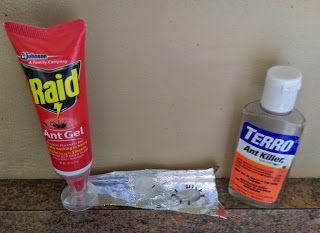 A few minutes later... (the ants are more attracted to Terro)

Update 10/10/16. I have another ant problem, I put out some terrro this morning and this afternoon it is swarming with ants. 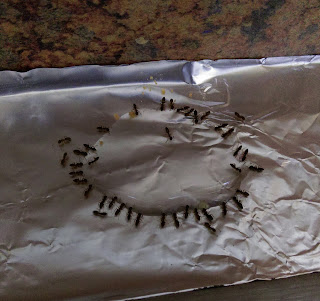 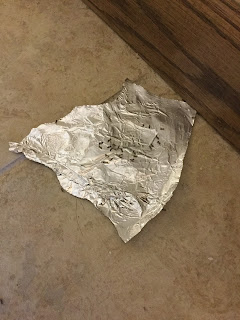 Hi - where can I find your email address? I can't seem to locate it on your blog.

I am very much pleased with the contents have mentioned. I wanted to thank you for this great article.

Hello and welcome.
This is me from Curious Cockroach.
And out recent review about ant killer and ]
you can read the whole article from our official
website as well here the read best ant killer thanks

I've used both and I definitely find the raid ant gel more effective for our ants. (Maybe they are different kinds of ants.) The ants definitely go to the Terro, but they just keep coming and eating it. They never seem to disappear. With the raid gel, they swarm it and then usually disappear within 24 hours.

Any idea about this spray?

I'm sorry, I know nothing about that spray. Terro is what works for me.

Thank you for visiting. I am a Recreational Therapist and I do this blog as a hobby so my girls can look back at what interested their mom, find recipes, etc. I love doing DIY projects, traveling, crafting, gardening, and baking.


Feel free to use an image...as long as you link back to this blog. My photos are not to be changed or altered in any way shape or form without my consent. Feel free to use my ideas for your personal use only. If you have any questions about whether you can "use" one of my ideas...feel free to E-MAIL me and ask!